Kungsängen - Initialisation of the site 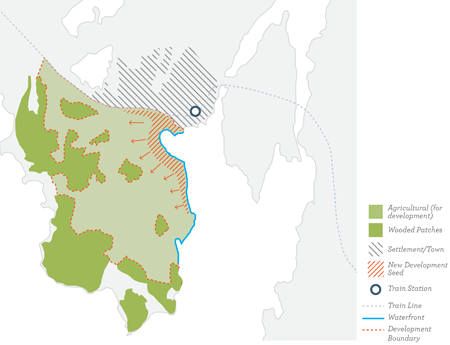 Site Inputs
Initialisation for a new site involves establishing: site boundaries, landscape components and whether they are developable, or to be protected, and attractors which will influence the distribution of local densities.

Site Extent/Boundaries:
The proposed site is on a 12 km2 peninsula, bounded on the north by a commuter train line and the existing town of Kungsängen.  The eastern boundary is waterfront, while south and west is primarily wooded waterfront.

2. Waterfront/Shoreline (Edge) - will serve as an attractor for development.  Densities will increase in proximity to waterfront. We will want to preserve public access to this resource.

3. Wooded lands (Patches) - to be protected and may potentially serve as low-intensity recreational areas.

4. Settlement/Town (Patch) - will initially be an attractor.  As our new settlement begins it will use the resources of the existing town to the south.  However over time, the old town will be allowed to redevelop using the rules of the new productive city.

Other Attractors:
5. Kungsängen Train Station - a new commuter station in the old town of Kungsängen will link our settlement to downtown Stockholm in 30min.

Additional Considerations for future sites
Topography - Although the terrain on this site is fairly flat, future sites will likely encounter highly varied and sloped terrains.  A preprocessing algorithm should be developed which evaluates the grade of slopes within the site and hours of solar exposure.  This data would then be used to inform the land available for settlement or cultivation in Settlement Simulation.