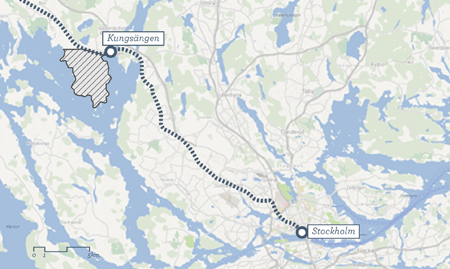 Internal & External Factors
In our sample tissues, the network was generated from internal inputs, connecting concentrations of production to dwellings, varying the detour and degree of connectivity.  The Brooklyn test showed how this internal network could link to surrounding urban fabric.
The Kungsängen site presents a new scenario.  Here our development will serve as a satellite city to Stockholm, the region's metropolitan core, therefore the commuter link is of prime importance.  We'll look at how this link affects the internal network organisation.

(A2) Max. size of a commercial farm: 7 hA.
Threshold for splitting a farm into a multiple Wholesale Nodes 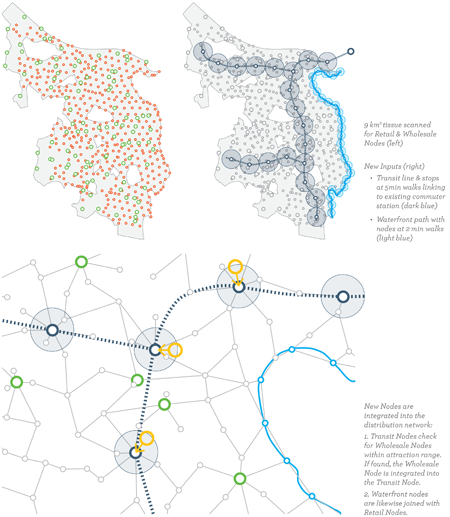 New Inputs / Rules
The combined site was scanned for Wholesale and Retail nodes.  Two new network inputs / rules were implemented for testing.  First a transit spine was placed, linking our site to the commuter train station with stops every 400m (5 min walks) Transit nodes checked for nearby Wholesale nodes, and if within range, they were merged.

Secondly a waterfront path was input with nodes for public space every 2 min.  These nodes checked for retail nodes nearby and similarly merged if within range.

All nodes were subsequently linked in distribution trees and overlapped as per previous steps. 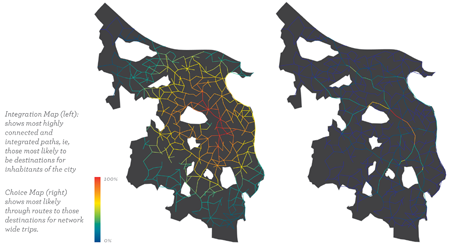 Connectivity Analysis
The resulting paths and nodes were analysed for connectivity and ranked.  These ratings were then used to generate the pubic space programme areas on the paths and nodes and built morphology was adapted to accommodate these public spaces. 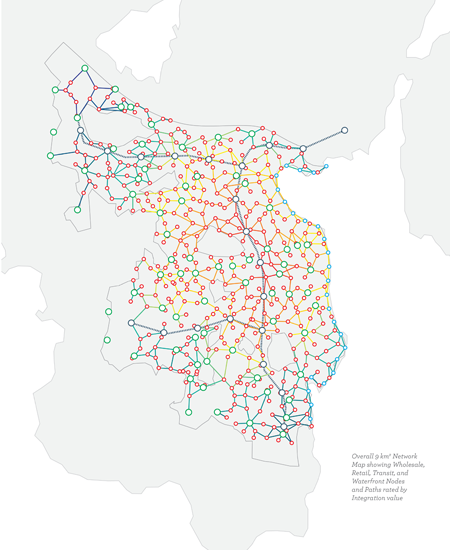 Additional Considerations
Choice maps should inform a path widths in terms of establishing primary routes through a city.  We currently use the integration measure as it tells us about most likely destinations for trips within the network.

Working with existing street patterns - in Brooklyn we took a tabula rasa approach, sweeping away the existing urban fabric within our site.  It would be interesting to see how our system could work less aggressively in existing fabrics, perhaps suggesting subtle changes to a street network.

Additionally, one critique that could be levelled against our emergent street patterns is poor navigability.  This could be addressed architecturally, with what Kevin Lynch would call 'monuments', interventions which establish unique identities to different places/nodes providing cues for mapping a city.  However, there still may be a scenario where a more easily navigable pattern be demanded, something more grid-like.  We believe that our system could be adapted to achieve these ambitions.