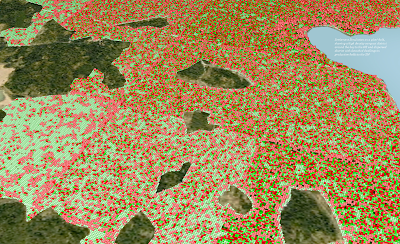 Population/ Social Inputs
Parameter settings for the Settlement Simulation are determined by the intended population, including number of people, as well as social and cultural factors.

As shown in the system development, Density and 'Friendliness' together determine the compactness of the dwelling typologies and the distribution of production sizes.

Commuters typically prefer not to live too dense, although our target audience will be attracted to the 'walk-able' lifestyle promoted by our city so we will attempt to strike a balance.

Our second intended social group, environmentally displaced peoples, will likely arrive with agrarian skills, so we will aim to provide for more distributed smaller scale production. 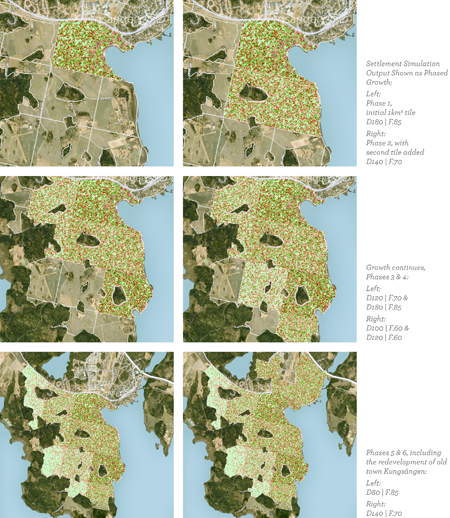 Method
The simulation was run on 12 tiles successively, each roughly from 0.5 to 1.5 km2. 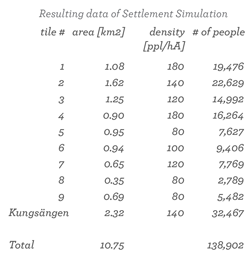 Additional Considerations
Climate - Our initial system was developed for deployment in temperate biomes.  The Stockholm region, while still within the temperate zone, is bordering on the Boreal forest.  This challenge was interesting to us as an opportunity to tune our implementation or the system and perhaps suggest new inputs.

One potential change, due to the shorter growing season,  is that productive cells will likely require more greenhouse enclosures and energy production to achieve previous values.