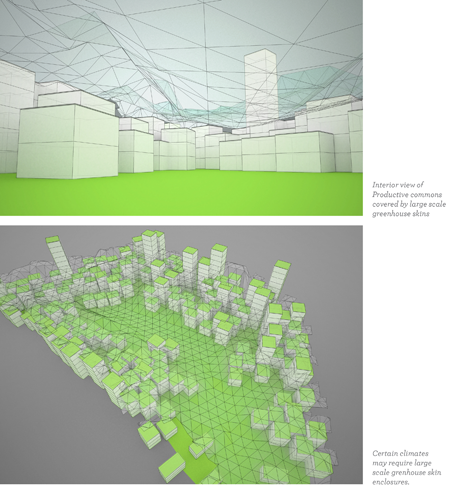 Typologies informed by Climate
The Kungsängen test site suggests new challenges in the interpretation of the 'Production Intensities' set out in the Settlement Simulation.

In a colder climate with a shorter growing season, it will be expected that there will be a heavier reliance on greenhouses, potentially including covering the productive common.
In order to maintain the public nature of our production areas, this would suggest the inclusion of  the recreational green spaces within that enclosure, as well as the secondary circulatory network.  This leads to the further question of whether access to our dwellings will likewise open into the communal greenhouse or whether it is a separate self-contained structure.

We propose for Kungsängen, the development of a 'Greenhouse Block' type, with an enclosure continuing to the extent of block perimeter.  Implementation of greenhouse blocks would be based on the collective Production Intensity of the block, as determined in the Settlement Simulation, the date for which is stored in each cell of the model.


Seasonality and Climate Change
The materiality and structure of the greenhouse block would need to consider whether these are intended as:

Year-round greenhouse skins with adjustable levels of permeability and ventilation based on seasonality
Or temporary enclosures which are erected (or perhaps simply skinned) when the temperature drops below the crop's tolerance threshold.  This 'event' could be celebrated as a seasonal festival.
Also at play in the greenhouse strategy, is the role of climate change in a region's long-term productivity potential.

It may be found, for a certain territory, that a greenhouse is required for the next 20-30 years, but that with the manifestation of expected temperature increases, the greenhouse will be no longer necessary.
Certain crops, such as leafy greens and root vegetables, have long been grown in unheated winter greenhouses in climates such as the New England region of the US.  Others, if desired, would require heat and are probably not feasible at the moment but could subject of further development.  For example, the surrounding dwellings, built of thick masonry walls could act as heat sinks to temper fluctuations in temperature.